Pakistan loves its neighboring country India has always been famous for its IT services all over the world. Low costs and better human resources are pushing international companies to outsource all their IT services to developing countries. For this reason, Pakistan has seen massive growth in its IT services exports over the years. Despite the severe economic downturn, this fiscal year 2021-2022 was no different and the IT services export industry achieved a record total revenue of around $2,615 million.

Now, those are certainly big numbers, but what’s even better is the fact that this is a 24% increase over last year’s IT services exports, where the numbers remained at $2,107 million in 2021-21.

The Pakistan Bureau of Statistics (PBS) has released detailed findings on the IT industry and the amount of money each sub-sector i.e. (IT Services, Computer Services, Telecom Services and Software Services) made in the IT industry. computer export industry. Let’s discuss each of them and also break them down into detailed stats.

Export of IT services

Pakistan’s IT export industry recorded an outstanding performance in IT services, the IT services industry experienced an exceptional growth of 26.40%. Overall, the industry has gone from a total of $1,666.310 million in the previous fiscal year to $2,106.145 this year. Exports of software consulting services were largest in computer services, growing by 43.43% from $554.612 million to $795.480 million. Hardware consulting services saw a staggering increase of 429.58% from $0.551 million to $2.918 million. 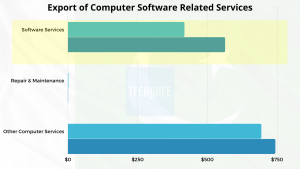 Over time software has become an important field, it is almost a gold mine and a shining opportunity for IT exporting countries like Pakistan. Pakistan’s IT export industry witnessed a growth of 34.87% in software-related services this fiscal year. Last year, the country made $417.485 million from software services, the amount increased to $563.071 million this time, which is a good increase nonetheless. 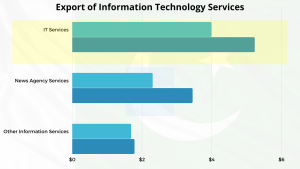 IT services have been in high demand lately, and Pakistan is surely benefiting from this, Pakistan’s IT services exports have seen an impressive increase of 31.08% from $3.990 million to $5.230 million. News agency services in the IT sector are also in high demand and have increased by almost 50% from $2.304 million to $3.448 million. Other smaller or unrelated information technology services also rose a mere 5.69%, from $1.686 million to $1.782 million. 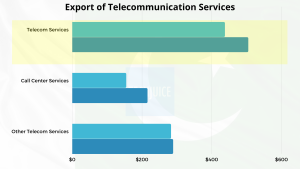 Other telecommunication services increased by a small 2.12% and their revenues also fell from $282.946 million to $288.939 during this financial year.

Despite difficult financial and political circumstances, the IT export industry has not only flourished, but also experienced massive growth. One of the main reasons for this is the fact that the industry is completely dependent on other economies for labor and income, making it a gold mine for any unstable or developing economy.

A computer export industry not only is unaffected by political and financial conditions, but also helps bring massive foreign exchange into the country, thereby improving reserves. In a nutshell, you could consider the IT export industry as a great shield against all circumstances. Therefore, governments should not only actively invest in the industry but also try to increase the IT influx into the country.

Pennsylvania is set to receive $100 million from the Infrastructure Investment and Jobs Act to improve broadband access. Advocates and local legislators say it has the power to transform rural communities. Susan Boser, a sociology professor at Indiana University in Pennsylvania, said the decline in manufacturing jobs in the mid-20th century hit rural towns the […]

MISSISSAUGA, ON, April 25, 2022 /PRNewswire/ — Systems With Intelligence, (SWI), announced a partnership with Util-Assist to provide a complete, turnkey, security monitoring and response service for electric utilities. One of the many challenges that utilities face is securing their remote sites and equipment. Util-Assist With their skilled workers already at capacity and ever-shrinking budgets, […]

Tesla owner Jeff Tutorials is very active on Twitter, and he’s not shy about speaking his mind, even if it might upset other Tesla fans and owners. He recently took to the platform to voice his concern about wait times for Tesla Service. Tesla CEO Elon Musk didn’t immediately respond, though. he finally replied to […]